In 2006, a project to create an open-standard for the delivery of construction handover information was undertaken at the Construction Engineering Research Laboratory (POC. Bill East) at the request and sponsorship of NASA (POC. Bill Brodt) and the White House Office of Science and Technology Policy. The Construction Operations Building information exchange (COBie) version 1.0 specification was published in 2007. As the name of the indicates, its purpose was to capture building construction handover information. Specifically, COBie identified how  the data already being delivered at construction handover, for both manufactured building products and equipment requiring preventative maintenance was captured. Key to this report was the identification of data sources and uses throughout a building's. Delivering this information in an open standard data format provides real-time as-built equipment data during the construction process and eliminates the need to produce traditional operations and maintenance manuals. 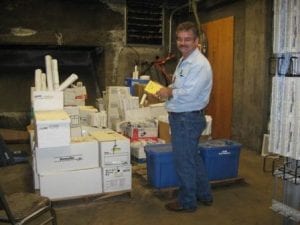 It was during COBie's first pilot test that the photograph of the facility manager in front of a set of boxes of handover documents was taken. Little did the team know at the time that this photo would become the world-wide symbol of the problem COBie was trying to solve.

By 2008 commercial software companies began to demonstrate their ability to deliver COBie data. In all, 13 public COBie Challenge and Case Study events were held in the United States between 2008 and 2014. These events established COBie as the first standard capable of providing the non-geometric building information created from Building Information Modelling (BIM) software and updated during construction management, equipment installation, and building commissioning.

From the first 2008 test onward, automated testing software was used to verify compliance against the COBie requirement. Checking the resulting deliverable can also be used as a very important design and construction drawing quality control tool to ensure that related BIM models actually contain the information found on contractually required drawings. Including objectively testable quality control requirements in COBie has been one of the cornerstones of this effort from the beginning.

Following the initial 2008 demonstration, participating software companies expressed interest in supporting a single internationally recognized construction handover information exchange specification. As a result, all later work on COBie followed relevant international best-practices. This included participation in International Alliance for Interoperability (IAI) processes and events. For example, the COBie Information Delivery Manual (IDM) was registered with the IAI’s international IDM registry. To provide a common technical specification for COBie, the COBie Model View Definition (MVD) was also created. The first MVD was developed based on IFC 2x3 and published by IAI as the FM Handover MVD as described in this paper in the Journal of Computing in Civil Engineering. This version of COBie, version 2.26 was also included as part of the National BIM Standard - United States, Version 2 (NBIMS-US V2).

During this time, those unfamiliar with construction handover insisted that business case documentation be provided to justify the delivery of information instead of document-based handover files. Using the business process models documented in COBie's Information Delivery Manual the COBie team created a business case calculator. The resulting COBie Calculator, allows companies to predict the decrease in overhead spending needed to collect COBie data during a project versus what is traditionally an layer of wasted project overhead.

In 2015, COBie became one of four (4) IFC4-based information exchange standards published as part of the National Building Information Model Standard - United States® (NBIMS-US), Version 3 [5]. The minimum requirements for these standards were the production of IDMs using the Business Process Modelling Notation (BPMN) and MVDs using the ifcXML specification. Beyond the schema requirements analysis (IFM) and schema definition (MVD), each information exchange project was required to provide a business case calculation and example data files, demonstrate the practical use of the MVD using commercial software, and identify training, testing, and implementation resources. A review of the decade long history of the NBIMS-US effort is instructive for understanding why such stringent requirements for technical standards were introduced in Version 3 of the standard.

For those who have not see the current COBie standard it may be downloaded from this link: NBIMS-US V3, Chapter 4.2. The first annex to the standard is a specification for the spreadsheet mapping of IFC data a physical format that could be used by contractors, subcontractors, and facility managers who do not use STEP physical file format. It is this COBie Spreadsheet Physical File Format that is the most widely adopted international uses of an IFC schema used today. The second annex to the COBie standard is a US national standard compliant XML schema for the exchange of small bits of COBie data (transactions) instead of needing to exchange the whole COBie data file every time. These transactional exchanges are key to the development of mobile technology to glue field data collection to real-time asset registries.

According to the COBie quality standard two conditions be met. The first condition is that the software is capable of exporting or importing the required set of COBie data, based on the appropriate phase of a building’s life cycle. Given the technical specification of the COBie standard, this question can be objectively answered using open-source testing software. As this is the only quantitative metric for the assessment of information quality available today, innovative users have also begun also to use COBie to access the quality Building Information Model data directly.The second condition is that users know how to apply this software to correctly provide deliver COBie data required for their specific project phase.

During the initial period of COBie adoption (2008-2014), over 30 commercial software systems were tested. These products support the entire life cycle of a building, including the stages of planning, design, construction, and facility management section. Only four (4) of the 30 products tested were designed support those who are in the traditional bSi lane of design BIM software. In a further departure from the traditional IAI/buildingSMART audience, only three (3) of the 30 products tested delivered COBie data in STEP Physical File Format. This means that 90% of software that has undergone formal testing to produce or consume COBie data utilizes the alternative Spreadsheet Physical File Format documented in the COBie standard.

Given the robust objective testing of over 30 products, it was clear that COBie (at least in spreadsheet format) could be used by any interested commercial software at any stage during the project life cycle. Since 2015, COBie testing has moved away from questions about software capability to that of users’ ability to correctly apply that software. Today, an example life cycle simulation of a small two-story building has enabled design and construction professionals to directly test their own software. These test files are freely provided under a Creative Commons license, allowing anyone to check this work. Documentation of the results of these tests provides the “cookbook” needed to seamlessly capture COBie data.

Today, COBie requirements can now be found in projects across many countries. COBie has become the defacto international standard for the delivery of electronic building handover data. In some countries, national governments have mandated the delivery of COBie data. In other countries, COBie requirements are made on a regional- or owner-specific basis. Regardless of an owner’s interest in COBie, there has been widespread inconsistency in the specification, enforcement, delivery, and use of COBie data. Furthermore, there has been innovation in real-time as-built data collection by construction companies who typically prefer to add project costs under a traditional handover process. To support those who require and provide standard-compliant COBie deliverables, and to recognize the need for real-time as-built data collection, buildingSMART international formed the COBie Certification Subcommittee.

In May 2020, buildingSMART began conferring the title of COBie Certified Professionals™ to those who successfully completed a comprehensive two-hour technical examination. Related examinations such as the introduction of a bSi COBie Foundation exam and a Registered Training Provider process are currently underway.

In 2020 buildingSMART international is expected to begin a project to consolidate work accomplished in the US (or under contract to the US Army) to produce a new streamlined and internationalized version of the COBie MVD and related information. As this project evolves additional information will be provided.

If you and/or your company is interested in the COBie 2.5 project, please email cobie at buildingsmart.org and express your level of interest.

Any cookies that may not be particularly necessary for the website to function and is used specifically to collect user personal data via analytics, ads, other embedded contents are termed as non-necessary cookies. It is mandatory to procure user consent prior to running these cookies on your website.